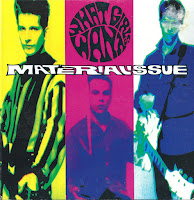 This is one of those weeks where I simply don't have an abundance of stuff prepped, but in the interim there's this.  A quick three-song promo released contemporaneously with Material Issue's sophomore album, Destination Universe.  The single, "What Girls Want" pales slightly when stacked against International Pop Overthrows now ubiquitous anthems, yet still thoroughly rocks.  That wah-wah effect on the guitars won't quit - not that you'd realistically want it to.  It's followed up by an exclusive non-LP cover of Grand Funk's "Bad Time, which i actually had more fun with than the original.  This shorty ep closes things out with an acoustic rendition of one of Destination's deeper cuts, "Next Big Thing."

This is one came packaged in a gatefold CD sleeve, and much to my dismay, the clerk at the store I obtained this from affixed a very stubborn price sticker right atop Jim Ellison's head.  I removed as much of it as I could, but still obviously blemished.

Thank you for this promo!

Hi, if you have time, will you please re-up this? Thank you! Brian