What I'm presenting tonight will either come as something of a revelation or a bit of rehash.  I say rehash because most of this collection of outtakes and alternate versions has been previously situated in a numerous bootlegs of varying audio quality, depth and sequencing.  I didn't assemble this collection, I'm merely dispatching it as I found it. 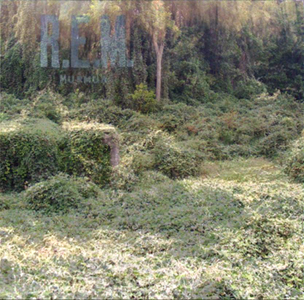 REM's Murmur was/is/always will be every bit the landmark it's touted as being.  A gale force surge of fresh air that sounds untouchable and out of place today as it did when it made it's bow in 1983.   The formula?  A tapestry of oblique prose, minor-key melodies and forward thinking, yet disarmingly warm charm.  Murmur's un-superfical notions must have presented itself as a stark anomaly for it's era.  Then again, I wasn't on board for it when it officially surfaced, out of sheer ignorance and inaccessibility.  I wasn't tuned into college radio back then, yet the record shaped and defined that humble left span of bandwidth, one which I would not only sacredly internalize, but eventually play an active roll in.  Fast forward ten years later and the mainstream not only embraced REM, but the format in which Michael Stipe, Peter Buck, Mike Mills, and Bill Berry perhaps unwittingly staked their collective reputations in.  Numerous Grammys, platinum records, and arena tours would ensue, but that first REM record (not to mention the preceding Chronic Town ep and Hib Tone version of the "Radio Free Europe" single) would remain peerless...even by it's own architects.

The tracklist and source details are as follows.  Some tracks were omitted due to eventual official release.  The variances between the album and these alternate takes are sometimes minimal, and in instances significant.  Please note, "Laughing" (track 25) cuts out early.

Another amazing batch and the only downside is waiting another year, making me miss Boogie Woogie Flu and its always impressive Hanukkah stuff, and of course Yo Lo Tengo.

Eight nights of awesome music is the best way to end this sad, frustrating year. Thanks again for all your dedication and hard work. Can't wait to see what treasures you uncover in 2018!

Thank you for this post and for all the great music over the year.

You are absolutely right that if you were not there at the time you cannot really understand the impact of R.E.M. and Murmur. This is not being snobby, but more a reflection that the effect of R.E.M. became so great that only a decade later a newcomer could not comprehend why the band and their music were so refreshing and even revolutionary. (Plus too many of the young folks say, "Oh, R.E.M. I love 'Everybody Hurts'."! That's a joke -- sort of.)

If it's not too much to ask any chance you could reup "So Punk, Barely Visible To The Naked Eye"? Cheers!

I got the CD! I will upload it in flac and 320 KBPS mp3 soon. I haven't forgotten just had a busy year. Thanks for letting me know that album exists! :D See you soon broskis!

Thank you again for all your great shares (during the holidays) and throughout the year! Much appreciated!

I appreciate the kind words everyone. And thanks for your shares Rob. Love the site.

I can see why the band hated the Hague version-but man...the vocal mix is awesome.

Chance of a re-up?