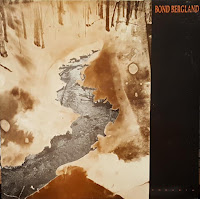 Prior to cutting his first (and apparently only) solo LP, Bond Bergland was part of San Francisco's Factrix, ambient/noise experimentalists whose stripe of post-punk I can't say I have much affection for.  Luckily, the album he recorded under his own name is considerably more approachable.  With a vocal acumen that sits somewhere between Peter Murphy and Steve Kilbey, he guides Unearth's ten songs with a measure of gravity to be certain, albeit you'll be hard pressed to encounter anything overtly morose or wallowing.  The arresting and placidly contemplative "Found Wonder" is effortlessly sublime, and nearly worth the price of admission in itself.  Unearth's opposing extreme (if you can even classify it as such) "Open Arms" is smart, assertive indie rock that strikes me as a could-have-been college radio staple. The brunt of the remainder of this disk is stocked with nimble, instrumental-centric forays wherein Bergland woos you down arpeggio-addled rabbit holes revealing dexterous guitar work with glints of everything from jangle to pesudo Celtic.  I'd be remiss if I failed to credit Douglas Lichterman's tribal percussive instincts as well, particularly on the opening "Fountain of Youth."

good stuff, thanks as always for 'unearth'ing these!!!!!!

Thanks for the Bond Bergland. Had been looking for it and it was worth the wait. Bergland was also in the Saqqara Dogs, who worked in a similar vein and released an EP, World Crunch (1986), and an album, Thirst (1987). The only other solo recording from Bergland seems to be the instrumental track "Moonlight Ride", from the Tellus #10 - All Guitars! (1985) cassette compilation.