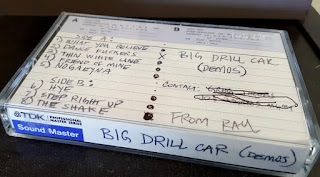 Needless to say, the past few months have taught all of us that there are far greater tragedies in life than our favorite bands throwing in the towel.  Nonetheless, we're human and people are always going to want what they're gonna want.  There were few events in the realm of indie rock that I wanted less than the departure of Big Drill Car, whom after their third studio album, 1994's No Worse For the Wear, called it a day about a year or so thereafter.  Maybe the rationale for us not really ever "getting over" the dissolution of certain combos resides not merely in our selfish human nature but the fact that some artists/groups had something so singular and glorious to offer they were simply irreplaceable.

The Huntington Beach by way of Costa Mesa, CA quartet's mid-80s origins were inauspicious enough, with their nucleus consisting of frontman Frank Daly and guitarist Mark Arnold, both expats from the final lineup of the respectable, though never quite crucial Reagan-era, hardcore fixtures MIA.  From the get go however, starting with 1988's Small Block ep (technically a demo from what I understand) Big Drill Car didn't buttress their punky forte with gratuitous speed or sociopolitical undertones, rather a delirious infusion of melody and offbeat topical matter.  Cementing the lineup with bass wrangler Bob Thomson and drummer Dan Marcroft, BDC quickly built a reputation in the southern Cali skater-punk circuit and quickly garnered the attention of SST Records spinoff imprint Cruz. 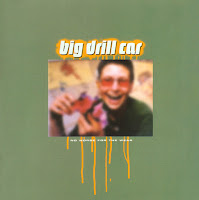 Bearing a pop underbite a mile long, BDC's savvy for hooks and beefy but rich arrangements pointed to inspirational antecedents like the Desacedents/All (whom they shared a label and multiple tours with) and Husker Du. In fact, throughout the early '90s they seemed to be inseparably spoken of in the same breath as Green Day, prior to that band's juggernaut to stardom shorty thereafter.  And it wasn't just stick-to-your-ribs songs that made these guys exceptional, but a secret ingredient in Mark Arnold's tendencies to peel off mind-bending flights of guitar fancy not dissimilar to clearly non-punk axe shredders like Michael Schenker and even Joe Satriani. It's a formula that worked wonders on Big Drill's first LP, Album Type Thing in 1989, a record of such consistency, chops and compelling tunes that I unabashedly regard it as on par with the strongest of Husker Du's deservedly lauded catalog.  Their 1991 follow-up, Batch sported a slightly more lucid sonic aplomb, but not relenting an iota of vigor or charm.  By '93 movement was afoot in the ranks of the band. Thomson and Marcroft had departed the lineup, and were replaced by a new rhythm section consisting of bassist Darrin Morris and basher Keith Fallis, just in time for what would be the group's last record, No Worse For the Wear.  The album in question didn't disappoint in the least offering a dozen savvy but nuanced melodicore bangers that easily held their own to that year's slightly more sales-friendly chart toppers Dookie and Smash.  Success beyond the punk-pop circuit just wasn't in the cards for them, and with sales of NWFTW not eclipsing those of Batch, Big Drill Car decided it was time to move on.

Presented here are eight prototypes for their swan song.  In addition to shopping for a new rhythm section the band was also canvasing for a new label, which they eventually found in Headhunter/Cargo.  I'm not sure how many copies of this tape were actually fielded out, but I recently became the lucky owner of one. Ironically, if you're already an established BDC customer you already have five of these demos, which surfaced on the group's odds and ends compilation, A Never Ending Endeavor in 2009.  The fidelity of those songs on my cassette strangely enough aren't the least bit inferior to the ones that made the jump to Endeavor, and best of all we get an entirely unreleased tune here in the guise of "Dance Fuckers," an 85-second balls-to-the-wall slammer that bleeds the same cathartic ferocity of one of my favorite Batch selections, "Ick."

As an unrelated bonus I'm tacking on an unissued Beatles medley the band posted on their MySpace page, way back when that platform had some clout.  BTW, Big Drill Car have reunited (very) sporadically in the twenty-first century for live shows and even contributed a handful of new songs to the aforementioned Never Ending Endeavor collection.

couldn't agree more ... still hold their output in the highest esteem lo these many years

lucky find! still missed around these parts. "dance fuckers" seems to be a demo version of "duck and cover."

and they reissued the last 2 mia albums a few years ago and they're great. better than their hardcore stuff imo.

I think I may have missed that Neal. It sounded oddly familiar the first time I played it. Thanks for catching.