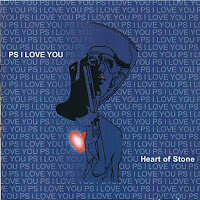 If you weren't able to get enough of Majesty Crush's lone LP, Love 15 and spate of short form releases, you'll be happy to know there was an epilogue of sorts via the late David Stroughter's subsequent project, PS I Love You.  M/C were consistently pinned with the shoegazer tag, at least by the press, but their heady dream pop inclinations were only half the story.  Beneath that gauzy glaze was sincere songwriting and a somewhat clandestine melodic undercurrent.  In a nutshell, Stroughter eschewed much of Majesty's extraneous noise, and treated PS I Love You as something of a glorified solo entity, and a comparatively breathable one at that. Ironically, one of my favorites on Heart of Stone, "Amsterdam," is none other than a blatant rewrite of M/C's "Penny for Love."  Considering how much I loved the original incarnation of that song, I'm hardly complaining!  Elsewhere we get shout-outs to a certain My Bloody Valentine frontman ("Where the Fuck if Kevin Shields") and the Beatles ("Set the Controls for the Heart of Liverpool"), alongside ruminations on far less iconic topics.

If the achingly bittersweet "Unless I See You Again" sounds vaguely familiar, it's likely because you downloaded it here, on Majesty Crush's exceedingly scarce mini-LP, P.S. I Love You, the title of which foreshadowed Stroughter's second act.

Thanks for this! I'd come across PS I Love You on YouTube a few years ago, but the videos that were up would inevitably get taken down. Where On Earth Is Kevin Shields is a great song.

can you please re-up this? thank you!