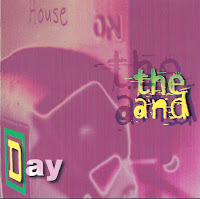 With their origins dating back to the mid-80s, even then in the pre-search engine era, I'd think it a fools errand for any band to dub themselves with such an indistinguishable moniker as...The And.  Really, do you mean to tell me all the good band names were claimed by 1983 when these Wisconsinites released their first 45? Needless to say, uncovering any pertinent knowledge regarding this band was close to an impossibility, save for their Discogs page linked above.  Day's copyright date is 1997, and none other than Butch Vig is listed as producer for half of these songs.  Several of the titles on Day overlap with their Reagan-era singles.  The problem is I can't decipher if we're getting the 80s versions of "How Busy is He?," "Role Models" and "Marshmallow Through a Keyhole," or re-recordings of them.  The latter (and more satisfactory) portion of the album skews towards the aforementioned songs with "How Busy.." sounding like something Off Broadway USA might have conjured up.  Just the kind of skinny-tie power pop MTV might have aired at 3 AM, and ditto for "Who Do You Kiss."  "Marshmallow..." is a synthy confection that's also worth the price of admission.  Elsewhere, The And hop around from resembling a competent bar band to Big Country, with each of their tunes boasting something of a unique persona.  As you might surmise, "I Fall to Pieces" is the Patsy Cline number, with the band doing a fairly robust read of it at that - a lot more fun than Screeching Weasel's rendering of it I might add.  Finally, I track ten on this CD is mysteriously omitted from the track list on the tray card. Enjoy.

Thank you for everything you do!

You probably know that there's another album from The And, which is called (naturally) Night. Which is which much different from Day. There's more of a Simple Minds vibe on Night (there's a song called Simple Minds. Day is the better album, Night is more a curio.

I didn't realize there was a second And album. Do you know what label put it out? Thanks.

You had me at Wisconsin :)