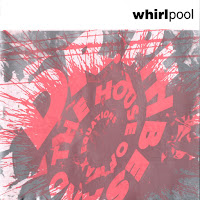 When I plucked this one off the bargain rack, I was reasonably given the impression the band in question was Whirlpool...but upon further examination I was several syllables off.  By all accounts (namely the one I was able to peruse courtesy of the Guardian), Britain's long since departed Dr. Phibes & The House Of Wax Equations were something of a force of nature to witness live.  For most of us however, two scarcely distributed indie albums will have to suffice, Whirlpool being the first of them.  It would seem much has been made of their psych leanings, albeit Dr. Phibes sidestepped the whole Madchester miasma completely, and didn't bear much in common with the Spacemen 3, or even glorious drone merchants Loop.  No, the Phibes vibe was more in tune with the architecture of say, the Family Cat or Compulsion, with less pop appeal mind you.  Epic length ventures abound on Whirlpool, but the overarching effect isn't the stuff of drug-induced profundity so much as clangy, amped-out indie rock.  Guitarist/frontman Howard King Jr. makes for a throaty mouthpiece, yet "Mr Phantasy" and "When Push Comes to Shove" offer ample evidence that when emphasis is expended on melody his trio transcends the power quotient for something genuinely poignant.  As much as I wish there more tunes like the aforementioned populating Whirlpool, it's hard to knock Dr. Phibes enveloping sonic prowess.  A second album, Hypnotwister dropped in 1993.

WOW! Saw these at the Earthbeat (a free fest here in the 'Pool - much missed) c.89 or 90 and they were seriously good. Looking forward to giving this a blast. Thanks. J in Liverpool