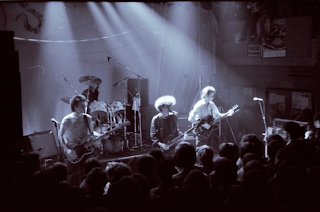 I haven't spoken much about The Passions, a UK post-punk act, who barely made a blip in the States, say for their signature song "I'm in Love With a German Film Star" appearing on many "lost '80s" type compilations.  The co-ed quartet was highlighted by vocalist Barbara Gogan and axe-wielder Cliver Timperley whose chiming, echo-ing guitar lines went a long way in coloring the Passions often austere disposition.  Deep, introspective, cool, and just accessible enough for a small but dedicated clutch of fans.  Three albums ensued between 1980-82, the most renown being '81's Thirty Thousand Feet Over China.  This FM broadcast concert was in support of that record and captures The Passions as their most persuasive peek.  It features the aforementioned "German Film Star," alongside the equally convincing "Into Night," "Runaway," and the particularly winsome "The Swimmer," which unfortunately cuts midway on this recording.

Barbara Gogan continues to perform occasionally in Europe.  More info on the Passions can be had at their Wiki page.

So cool-- I love The Passions!