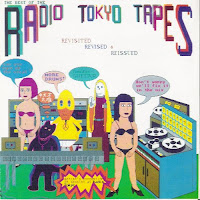 Radio Tokyo was a famed L.A. recording studio that enjoyed it's heyday during the 1980s, at which acts from Jane's Addiction to the Bangles laid down classic tracks. Owned and operated by the late Ethan James (an ex-member of Blue Cheer as well) the popularity and reputation of Radio Tokyo Studios and the artists that recorded there inspired three vinyl compilation LPs released throughout the '80s. The Best of... culls together 20 songs that appeared on these records, some entirely exclusive to these compilations.


Given the locale and the period, there are several Paisley Underground luminaries that take up residence here, including The Rain Parade, Long Ryders, The Three O'clock, and The Bangs (later the Bangles, although their contribution is 30 second jingle for a local entertainment rag). Outside the Paisley scene there was plenty of other local indie talent that made a pit stop to Radio Tokyo as well - The Minutemen, 100 Flowers, Savage Republic, Wednesday Week, The Last, Shadow Minstrels, and one of my fave unheralded acts of the time, Pop Art. And what would any various artists disk be like without some music from everyone's favorite Jewish lesbian folk-singer, Phranc

I HAD THE VERY GOOD FORTUNE TO HAVE WORKED AND PLAYED IN RADIO TOKYO IN THE 80'S AND LOVED ETHAN JAMES....I LAST SAW HIM N HOLLYWOOD AND HE WAS WRITING A BOOK ON RECORDING...HE WAS IN MY OPPINION, THE ROCK OF THE MUSIC BIZ IN THE ERA OF HIS HAND BUILT STUDIO....AND ALONG WITH MAD DOG STUDIOS, PUT MANY ARTIST IN THE POSITION TO ENJOY THE WORLD OF RECORDING,PRODUCING THAT HAS MADE IT POSSIBLE TO WRITE A "BLOG" OR "COMMENT" GVZ

spavid - would you be so kind as to re-post this? would be quite appreciated!

Link has been updated. Thanks for alerting us.