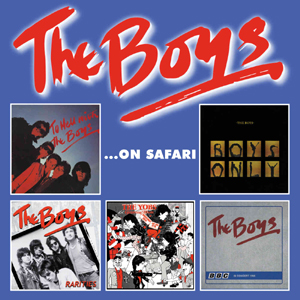 Like myriads of artists I've discovered posthumously, my gateway is often their signature song.  I'm reluctant to use the term "hit" as most of the bands I listen to don't have any to their credit.  In the instance of London's The Boys, "Brickfield Nights," the leadoff track and single from their 1978 sophomore LP, Alternative Chartbusters, was a modest success on their side of the Atlantic, and by the 1990s it appeared on many compilations anthologizing British punk.  Rightfully so, because even though it lacked the rapid-fire salvos or scathing commentary of the Sex Pistols  it was still sonically potent.  Moreover it was relatable, with the Matt Dangerfield-helmed quintet waxing on the short term nostalgia of their youthful camaraderie.  But what happened when The Boys transitioned to men - or at very least maturing post-adolescents?  Any such quandaries regarding their musical evolution can be explored on the new five disk collection The Boys...On Safari, with it's emphasis on The Boys third and fourth albums, To Hell With the Boys and Boys Only, as well as associated singles, demos and period recordings for the Safari Records imprint right up until the band's 1982 dissolution.

From the get-go, it seemed evident that The Boys were conscious of punk rock's often stifling limitations, and to their credit they opted not to take the purist fork in the road that everyone from the Damned to Crass made the exit for.  A pop angle was omnipresent even on their '77 self-titled debut, and by the time they graduated to album #3 they were just as frequently termed "power pop."  Whatever genre they transcended/slotted into the songs preceded all other factors, and they infused some phenomenal ones into To Hell...  After a brief but muscular tread through the instrumental standard "Sabre Dance," The Boys roar out of the gates with two visceral, and eminently powerful rockers, "Rue Morgue" and "Terminal Love" the latter so anthemic it could have vied as the the logical successor to the noted "Brickfield Nights."  Both songs not only played to the Boys sophisticated melodic strengths, but like "supergroup" contemporaries The Rich Kids (feat. ex-Pistols Glen Matlock and pre-Ultravox Midge Ure) the Boys equally nodded to the brasher inclinations of punk and the streamlined accessibility of seventies hard rock.  So spectacular were these two numbers it wasn't an easy feat to follow them up here, though the rollicking sway of "See Ya Later," and "Waiting For the Lady" is nervy, par-excellence power pop."  Oddly enough, a seven+ minute ballad "You Can't Hurt a Memory" is shoehorned into the midst of all of this, and a slow building one at that.

1981's Boys Only tamps down a trifle on the comparative formality of To Hell With the Boys, diminishing the tension in favor of a tight, but more casual modus operandi, wherein they go so far as to pitch us a reading of Sam Cooke's "Wonderful World," among a spate of  stimulating originals including "Weekend," "Monotony" and the ballsy punk-pop crunch of "Little White Lifeline."  I could do without the goofy anomaly "Miss You," but even though Boys Only could qualify as the weakest link in the band's slim catalog of albums it's still superior to what many of their competitors had churned out over the course of their entire careers. 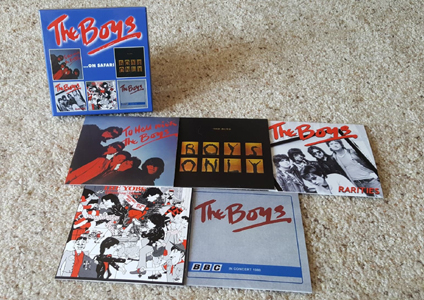 Another centerpiece of the ...On Safari collection is an exclusively curated compendium of rarities, bustling with nearly two dozen tracks. Many of these songs had already been bonus-ized on Captain Oi's 1999 reissues of To Hell... and Boys Only, but they're collected in one tidy spot here, plus the disk features an assortment of demos and outtakes cut between 1979-80.  Like many notable bands of their stature, Boys b-sides rivaled their more famous flip-sides and key album tracks.  Both halfs of the excellent "You Better Move On"/"Schoolgirls" 45 are here, joined by equally stimulating side-tracks "I Love Me" and "Cool."  And if you revere To Hell's... aforementioned "Terminal Love" and "Rue Morgue" as much as me, you'll find the original mixes of those here too.

In between the two proper albums cut for Sarafi, The Boys conceived an alter-ego of almost parallel notoriety, The Yobs.  The fourth disk here is composed of The Yobs Christmas Album, from 1980, wherein Dangerfield and cohorts put an unorthodox and ribald spin on roughly ten renown Xmas standards and even went to the effort of preparing a couple of their own, like the buzzsaw narrative "Ballad of the Warrington."  Sonically approximating Swidle-era Pistols and the Toy Dolls, the Yobs while cheeky at best and utterly profane at worst, weren't as shambolic as you might except. In fact they were downright tight and sufficiently produced.  Problem is the joke wears a little thin absorbed in multiple doses, unless of course you're a stickler for sardonic holiday tunes doled out in utterly thick Cockney accents.  Some of the classics retooled are "The Twelve Days of Christmas" and "Auld Lang Syne."

And what would one of these succinctly packaged, budget sized boxes be without a disk dedicated to relevant BBC sessions or an in-studio concert?  We get a ten song show tracked in February of 1980 drawing heavily from To Hell With the Boys, alongside more established standards "First Time," "New Guitar in Town," and "Brickfield Nights" (as if you weren't expecting that one) blended in for good measure.  A primo set that flashes by all too quickly.  The Boys...On Safari is available at your disposable direct from Cherry Red or Amazon.

Finally! and it was released on my birthday!!
anyway...check this out ;-)
https://tfgc1.blogspot.com/search/label/The%20Boys

I've been since so terribly biased w/ the first two BOYS albums that I've not given these 'follow ups' much of a chance. I purchased three of these five on import back in the 80s and was under-whelmed(though, still buying the next one...HOPING). That said, I've seen this box and have wondered...is it time to re-asses this era of the band. You might have done just that to push me onward.....