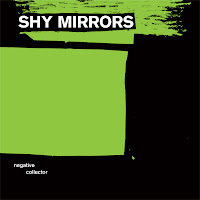 No sophomore slump here.  In 2011 I was blown damn-near clear out of the water by a new invention called Shy Mirrors, or more specifically their first album, Sailed Blanks.  The responsible party for this new contraption was none other than Mike Downey, the guitarist for Champaign, IL indie-pop stalwarts Wolfie, a band I couldn't get enough of during their tenure a couple decades back.  Shy Mirrors was initiated roughly ten years after Wolfie dissolved, and in an unlikely locale to boot, Stockholm, Sweden, where Downey relocated during the '00s.  For better or worse (oh alright, for better) his new endeavor siphons nada from the storied hipster circuit of his new home turf, and for that matter tables the comparatively "soft" tenor of his former Stateside exploits.

Instead, the template for Shy Mirrors is an unremitting scuzz-punk surge of blaring distortion and downstroked power chords, holding firm to the time tested, two-minute aesthetic.  In fact, there's no single thought occupying Negative Collector that exceeds further than 135 seconds!  Fusing Superchunk-esque vocal hooks to the breakneck thrust of the Exploding Hearts and Jay Reatard, and torpedoing his relentless salvos through lo-fi land, Downey has seized upon a winning formula.  Negative... isn't a particularly measurable progression from Sailed Blanks, but it doesn't need to be, as anyone who appreciates that first album will tell you.  As if the fourteen dozen tracks here aren't stupefyingly impressive in their own right, Negative's sheer consistency is the icing on an already scalding hot cake.  But don't take my word for it.  Bandcamp is beckoning, giving you the usual digital or vinyl (very limited I might add) options.  Refer to Big School Records for any other pertinent details you might need.
Posted by spavid at 8:38 PM