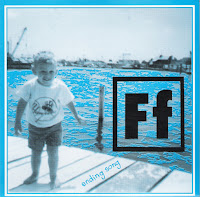 This is a quick follow-up to my entry last night for Ff's Lady Shoe album.  From what I'm able to gather online, this single was apparently released in 1994, though there's nothing to confirm that on the sleeve or the record label itself.  I'm going to go out on a limb and say that "Ending Song" beats anything on that album, incorporating an extra heaping dollop of melody, reminiscent of say, Overwhelming Colorfast.  Always a splendid thing.  The musuclar flip, "Diseased" isn't as immediate, but things turn around for the better by the two and a half minute mark.  Dense and punchy power punk in the mold of Bullet LaVolta.  And to think, the closest thing we currently have to these bands is Fucked Up, but I digress.

A. Ending Song
B. Diseased

I put this 7" out for Ff. I haven't seen or heard it in years. Sadly, Tom Price died just recently and we'll never get to see him sing them again. Thanks for putting this up!

Re send up please?

Re send up please?

thank you for reupload. i've been looking for those EP Album I'm Happy. These Things Happen in 1993. here's my request: could you upload ep please?

Yeah the EP would be cool. Any chance I can get the WAV files for the 7" if you have them? Thanks!