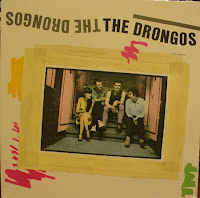 New Zealand's Drongos (who eventually uprooted to New York) are a fairly recent posthumous discovery of mine, and unlike a lot of the rather esoteric, sub-sub-genre music I share on here, I'm confident that had I encountered them when this album materialized in 1984, I would've appreciated them as much back then as I do today.   I put it that way because I was ridiculously tethered to Top-40 radio back in the early/mid '80s, and even though the Drongos possessed that type of accessibility, they probably would have registered a little left of the dial to warrant copious spins on college stations as well.  Recorded over the span of three years (1981-83), The Drongos falls a bit shy of revelation status, not that the band ever intended for the record to be anything more than a collection of smart and savvy modern pop songs, which it thoroughly is.  Offering a few modest nods to technological advances of their era without overindulging in them, this co-ed quartet delivers a wellspring of warm fretboard runs, fetching boy/girl vocals, and a very evident rhythmic aptitude.  A big, big thumbs up!  RIYL: Let's Active, The Producers, and The Dads.   BTW, a second Drongos album followed in '85 dubbed Small Miracles, which was as legend has it was recorded live on the street in New York City.  You can learn more about the band here, and even catch up with drummer Stanley John Mitchell.  Enjoy (or not).

Really good record... thanks! good power pop type stuff... not too dated. i like it!

Great review. I loved it.

I also co-managed the Drongos. The Small Miracles album was absolutely recorded live on the streets of Manhattan. If I recall right, we got 43 total takes of the 11 songs we could put on the album. I think there were just a few bass "drop outs" that were covered afterwards (really necessary, because there was no kick drum in the street kit) but otherwise it is totally what we got on the street.

Search for Richard Kennedy on YouTube and you'll see the Drongos lead guitarist doing some amazing things. He's a lefty who plays a normally strung guitar upside down.

Mike, what a great album. My copy still has the insert - complete with the quote from WXRT's Lin Brehmer when he was still at WQBK here in Albany where I probably first heard the band. Are their MP3's available? I just unearthed my copy and unfortunately the self-titled Drongo's album has a crack in it - right through the first two tracks on both sides. That means of course that I can't play "Don't Touch Me". Is there a place where I can purchase the MP3 for the song?

Could you please re-up BOTH Drongos albums?