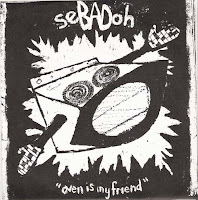 Anyone who's indulged themselves in Sebadoh's earliest, white noise-addled lo fi albums like The Freed Man and Weed Forestin' knows just how out of control Lou Barlow and Co. could get when they chose to go "improv." The aforementioned albums included a handful of what you would loosely call "songs" amidst all the blaring, cacophonous tomfoolery. If you're hoping to find tunes in the mold of "Magnet's Coil" and "Soul & Fire" on this five cut ep, stick to the Sub Pop albums. Oven Is My Friend brings the noize big time, with each seven minute+ side seemingly recorded on the fly with little-to-no overdubs. Just barely eking it's way out of the grating, screaming din is side b's "Cheapshot," which is about as "conventional" as the proceedings get here. Oven is somewhat akin to Husker Du's Land Speed Record, sans the geo-political overtones.


Since the songs run straight into each other, I opted not to edit them. Not for the faint of heart. You have been warned...


Side A: Oven is My Friend (Church Police cover)/Prove It
Side B: Cheapshot/Waxbag Maestro/Delicious Cakes

LOL, terrible, I love it. 4-tracks suck and I love them too.

Sebadoh is/was such a strange band early on, judging by the early material I really don't know if they wanted people to like them or not, but if you sit through a lot of the "noise" they would turn into weird geniuses where the songs would come alive and you'd get hooked.

I got reeled in with Bakesale, License to Confuse was played on the "UN" radio network that was an awesome and ill fated syndicated radio network in 94 that played a lot of "indie stuff".

I became a disciple of Jason Lowenstein, I never thought he got his due with the press, I thought he was writing better songs than Barlow at the time of Harmacy. Barlow sort of got...emo? before emo.

This is a great listen so thanks man!

Q: anyon have the Split with Big Stick posted in internetville?

any chance for an upload on this?